Posted at 01:48h in Uncategorized by Michal Carrillo 0 Comments
0 Likes 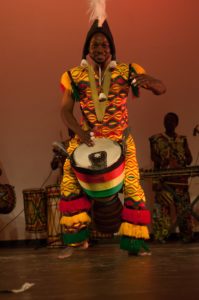 Director and Lead Drummer of Duniya Fode hails from Guinea, West Africa and has been recognized internationally for his work as the lead drummer with the acclaimed ensembles “Les Merveilles de Guinée” and the national ballet of Guinea, “Les Ballets Africains”. A protege of the late, Mohamed Kemoko Sano, Fodé is now one of the most respected and sought after drummers of his generation and is currently based in the Twin Cities. Highlights of his career include opening for Damian Marley at The Apollo Theater, featured spot on MTV for Black History Month and recording with Trey Anastasio of Phish.